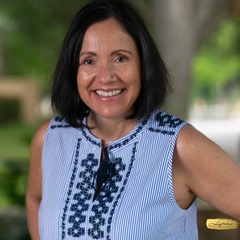 Maria Esteves is from Caracas, Venezuela. She has BA degree and a master’s in organizational development. Prior moving to Dallas she was a successful management consultant for a global firm, and also held major leadership roles at leading business conglomerates and major retailers.

After arriving in Dallas in 2001 with her husband Jaime and her two small sons, she decided to become a teacher. She was a Kindergarten teacher in the public school system and after a year became a Spanish teacher at Christ the King Catholic School. Mrs. Esteves joined Meadowbrook School as the Spanish Kindergarten teacher in 2010.

Mrs. Esteves is active in the Latino Community in Dallas where she fundraises for the education of Latino children through her non-profit organization, Grupo AHOrA. Mrs. Esteves is also active in the Museum of Geometric and MADI Art and in the Perot Museum of Science and Nature. As a mother, she also was very involved in the education of her two sons during their years at Greenhill School in Addison. Her son Jaime graduated from Emory University in 2018 and her son Ricardo graduated from Columbia University in 2019.